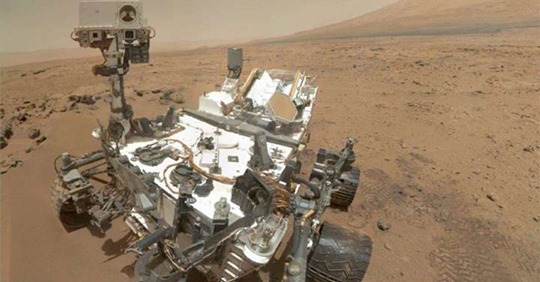 It’s been a tough few years here on planet Earth, but things are looking a lot more chilled on our closest planetary neighbor Mars.

Reddit has been sharing a “before-and-after” image (below) of the Curiosity rover over seven years apart. The image on the left was taken in 2012, shortly after it landed on the Martian surface, while the image on the right was taken on October 11 last year.

Considering the lonely rover has spent seven years working on a distant alien planet, occasionally in the middle of violent dust storms, it’s not looking too shabby. The rover is still fully operational too. Although its primary mission was just two years long, NASA decided to indefinitely extend its mission. To this day, the rover is rolling around the planet, gathering data on the Martian climate and geology.

NASA explains that the latest image was stitched together from 57 individual images taken by a camera on the end of Curiosity’s robotic arm. The “selfie” was taken in celebration of completing a chemistry experiment that involves finding clay, cooking it, and then “sniffing” the gases that come off it. The aim of this was to get some insights into the chemical composition of the soil.

Curiosity was launched in November 2011 and landed on Mars on August 6, 2012. Kitted out with 10 scientific instruments, the car-sized rover has been surveying the Gale Crater, searching for geological clues and climatic evidence. Its prime objective was to help answer the question of whether Mars could have ever harbored microscopic life.

It’s also gathered a bunch of amazing images throughout its tenure too.

Previous With A Wingspan Of 7 Feet, The Harpy Eagle Looks Like A Person Dressed Up In A Bird Costume.
Next NASA Makes Their Entire Media Library Publicly Accessible And Copyright Free

For most New Yorkers, getting to the Hamptons in less than three hours is a …